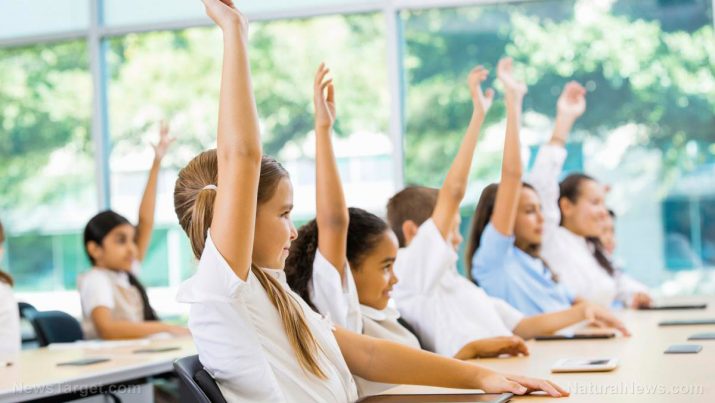 All across the country, professors and school administrators are making a concerted effort to indoctrinate an entire generation, routinely filling the minds of young people with a radical left wing ideology while simultaneously telling them lies about conservatism and American history. It’s simply not enough for these school administrators to allow students to think for themselves and arrive at their own political conclusions based on their personal morals, values and beliefs. To allow young people to think independently would mean there’s a chance that they could find the conservative philosophy superior to the progressive mindset, and if that happens, then the future of liberalism hangs in the balance. Leftist professors, administrators and school board members don’t want to take that risk, so they resort to relentless liberal indoctrination – and they get paid for doing it.

“When we heard testimony that talked about the hours that they spend, easily over 40, 50, 60 hours in school district business, it was logical. Everyone agreed,” explained Lupita Sanchez Cornejo, who chairs the LA Board of Education compensation review committee. “The District has over 734,000 students that they’re responsible for,” she continued. “As a parent myself, as a Angelino, I want a school board member that is accessible and is available 24-7.”

Los Angeles Unified School District board President Dr. Ref Rodriguez released an official statement about the raises, which are set to go in effect in two months. “We thank the LAUSD board of education compensation review committee for engaging in a thoughtful and comprehensive process that ultimately supports our continued efforts on behalf of the students, families, and school communities we serve,” the statement read.

The problem here actually has less to do with the fact that these board members are getting raises, and more to do with the never-ending stream of tax dollars from the American people to pay for our kids to be indoctrinated. It is worth noting that there is a big difference between indoctrinating and educating. If schools were truly educating young people and encouraging them to draw their own conclusions, then there wouldn’t be an issue. Indoctrinating, on the other hand, is not the same as educating because it deprives students of the truth and replaces it with a one-size-fits-all political ideology. (Related: America’s universities have become training camps for left wing extremism.)

Back in 2014, a professor at Eastern Connecticut State University was caught telling students in his creative writing class that republicans are “racist, misogynist, money-grubbing people” who want things to go back “not to 1955, but to 1855.” The professor even went on to warn his students that if republicans were to take the senate in the 2014 midterm elections, then colleges would begin to close down as a result of conservative policies.

Of course, this is just one example out of hundreds, but it is an accurate representation of what the American people are paying for. Professors and school administrators all across the country are creating a campus environment centered on the principles of social justice and radical liberalism. Demanding that our schools give students a full, well-rounded education that covers all viewpoints fairly should not be too much to ask. The high school and college students of today are the leaders of tomorrow, and it is up to all of us to ensure that, at the very least, they have the ability to think for themselves.